You wouldn’t worry so much about what others think of you if you realized how seldom they do. 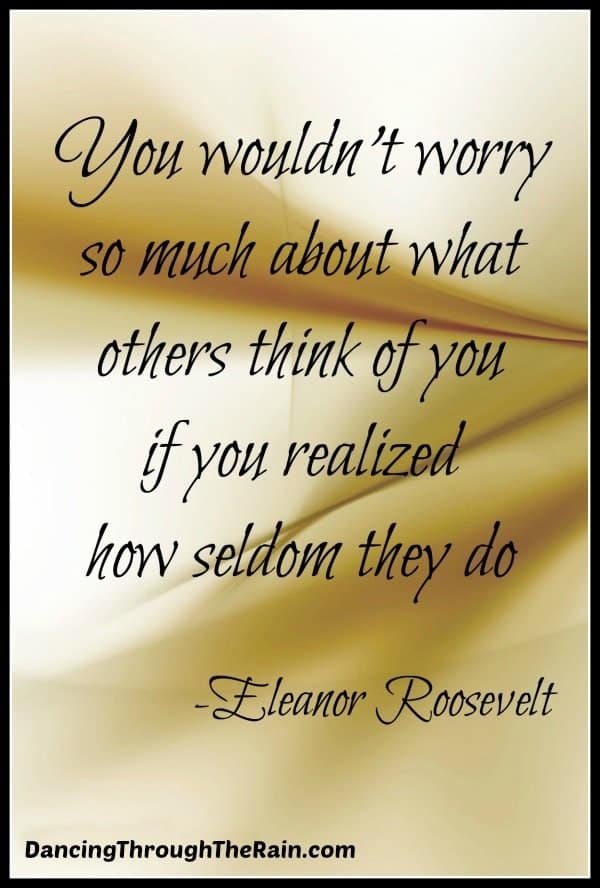 Don’t Worry What People Think Of You

This is something that continues our entire lives – and should! If everyone thinks you have bad manners, maybe it’s worth figuring out why. If people tell you that you might want to take a shower a little more often, that’s something worth exploring. If someone tells you that your behind is too big… well, they can kick rocks. And that’s the rub, right?

We want the approval of others. It is human nature. We want to be accepted for who we are, for the good and the bad, for the talents and the insecurities. But there is a point at which we let other people’s opinions get in our way.

We don’t go out because we feel fat. We avoid an office party because we can’t buy a new dress. We wear a hat all the time because our hair is thinning. We all have that “thing” that we do, and we really shouldn’t. The truth is – as Eleanor Roosevelt so eloquently put it – “You wouldn’t worry so much about what others think of you if you realized how seldom they do.”

I have Vitiligo. It’s not something I’m entirely comfortable with and I’ve never mentioned it publicly before today, so I’m taking a first step here. I am living with Vitiligo and it’s one major thing (among others) that I’m insecure about. (If you’re not familiar with Vitiligo, the NIH describes it as follows: “Vitiligo (vit-ill-EYE-go) is a disorder in which white patches of skin appear on different parts of the body. This happens because the cells that make pigment (color) in the skin are destroyed.”)

I was diagnosed at 20, when I noticed a single white patch on my skin. I went to a dermatologist and while showing me a second patch (in an entirely different part of my body that I’d never noticed), he gave me the diagnosis. My Vitiligo has gotten progressively worse over the years and while I have absolutely no plans to become an underwear model, it makes me insecure and contributes to some low-self esteem issues.

In most cases, there are no physical repercussions to having Vitiligo. It doesn’t hurt, it isn’t contagious and they don’t know a ton about it because it isn’t life threatening or critical in any standard way. That said, it takes a HUGE emotional toll. What if I’m not pretty anymore? What if people don’t like me and think I look weird? What will I look like in 10 years? 20 years? 40 years? It’s not an easy one and really requires you to look deep inside to figure out who you are past the surface of your skin. 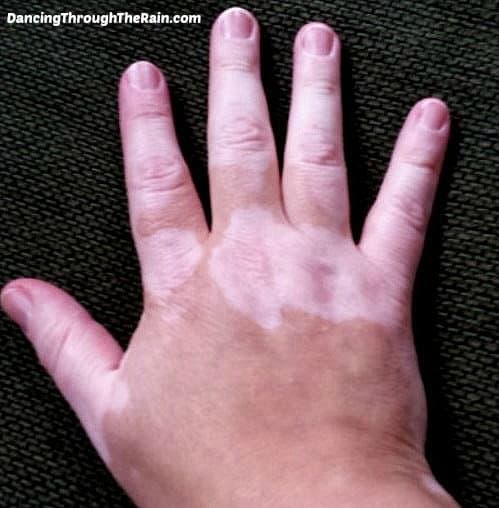 I turned 40 this last year (Woot! 40!), so I’ve been dealing with this for 20 years. The first 10 years were really, really hard. In the beginning, every time the sun came out, I would hide. I bought makeup to try to cover my spots (mainly on my hands, elbows and feet) and tried to stay away from new people as much as possible.

If I had to be with people, I would hide my hands. I’m a pretty social person, so while I was protecting myself from my newfound issues, I was also keeping myself from being happy. But we all have our process and this was mine.

No one really asked about my spots, so I thought they were being polite. I’m Caucasian, but I get a tan the second the sun shines through my window in the morning, so I was SURE everyone saw them. Didn’t they? It took me that first 10 years to come to the realization that no, they really didn’t.

Here’s the thing that we all have to realize – everyone is trying so hard to hide their own stuff that they don’t notice the little things that you are trying to hide. When I turned 30, I came to one of my favorite realizations – I am who I am and I like me. I am a total dork, I love the theatre, I love my family, I love playing the “What Broadway show is this TV actor from?” game, I love to quote music/tv/movies, I have a lot of quirks, but they all make me me. And I kinda really like me. So if other people are bothered by my skin, that’s kinda their problem.

I want to like them. I want to have a relationship. I want to be part of things and I don’t have much time for skin-deep judgements. There is so much going on in this world that the last thing we need to be crazily focused on is the right shoes or the size of our noses. You are who you are, insecurities and all. And there is so much that makes you great. No one else is focused on your small stuff – they’re focused on their own small stuff. All of it seems really, really big – I know – but in the grand scheme of things, it’s small stuff.

It is time to remind yourself that what other people think is none of your business. And when it comes to my Vitiligo, the fact of the matter is, other people’s thoughts are none of my business. The only person you need to be worrying about is you.

Everyone has their own issues. There’s a lot about myself that I’m not crazy in love with, but I accept most of it and the other things I’m working on. No one is perfect and you can’t expect that of yourself. Besides, what does that even mean?

I promise you that your definition of perfection also has issues that you don’t want to deal with. The good friends that you think have it all? They’re wishing they had some of what you do. It’s all about the perspective. Stop worrying about what other people think of your little things and own who you are. You are amazing in so many ways, you just have to see it.