Claiming your personal power doesn’t depend on external circumstances. Forgiveness is something you give on your own terms to empower your own life. It’s time to take your power back.

A few weeks ago we talked about apologizing for the mistakes we’ve made, so this week I want to talk about the other side of the coin – forgiveness. I think that forgiveness is seen in two different ways.

First, we see forgiveness as something generous and giving when someone has wronged us inadvertently or approached us genuinely. There is usually hurt in the “making up,” but it is doable and you can usually move forward.

The second scenario is a little different. When someone has really hurt you – and I mean on those serious, life changing days – it can feel different. If you or a member of your family has suffered abuse (physical, sexual, verbal, emotional), a violent encounter, a terminal medical diagnosis, or a loss of life, forgiveness is the last thing that you may be able to imagine.

Your life has been turned upside down in a way that you could never have predicted, wanted, or welcomed and there is nothing you can do to change your difficult situation. But how does one deal with that? How do you process it and keep moving forward? I know that it may be a tough place to acknowledge, but forgiving is not about forgetting or absolving someone else of what they may have done. It’s about taking your power back.

We have all been hurt in this life. Some in more serious ways than others, but it’s not fair to compare “hurts.” Real pain is pain, regardless of what has happened.

The only way to do that is to process the negative emotions and forgive. Again, this forgiveness isn’t one that you are doing for someone else – in fact, it really has nothing to do with the other person. It has to do with you and your future existence. You can either use the hurt to build you up or tear you down. And at the end of the day, finding a way to forgive and move on will make you stronger than you ever thought you could be.

We’ve All Had Toxic Relationships

I have mentioned before that I was in a bad relationship in college. This was someone that, at 19, I loved and was sure that I would marry. In private and in my 19-year-old brain, he couldn’t have been more wonderful. He was smart, personable, and fun. In public, I was told that we had to appear as friends or flirty, but certainly not committed in any way.

The first time he broke up with me, it was because he had to get a specific girl out of his system – and I waited. I dated another guy but made it clear to this poor (and kind) man that when my boyfriend came back, I would go back to him. I didn’t want to lead anyone on, so I tried to be honest.

A few months later, the original boyfriend and I got back together. We broke up and got back together seven or eight times total (I lost count), but I knew that this was going to happen. The things he told me, the life he imagined for us – so many things let me know that he was the only person for me.

Then he began berating me in front of his friends – our friends. I was dumb, I couldn’t do anything right, get out of here. So I did. And a day or two later, everything was back to normal.

He’d met my parents and I’d met his. I spent a few days with his family on a school break. Everyone knew that this was heading somewhere. So we went back to school.

A few days later, he left me alone in his room (awake, all night, waiting for him) while he went off with some “friends.” When I asked about it the next day (and was hurting more than I could imagine at the time), I got in trouble, he gave me an incredibly hard time, and I had to drop the subject. Without going into too many more details, between the feelings of disempowerment and damaging thoughts I began to have, this was not a good relationship. And to make things worse, I’d told exactly no one, despite my own intuition.

Then my boyfriend graduated. He moved away and we decided to give ourselves some time apart. I flourished in those months as a single person. I had fun with my friends, did a lot of acting, went to parties, and enjoyed being me again. I felt like I was moving back into being a more confident woman (although still a young girl in many ways) and was experiencing my full potential. I was standing in my own power again.

When he got the news that I was dating someone else, he was upset. But for the first time in a very long time, that was okay with me. Maybe it was time for him to be upset. Maybe I wasn’t his to be upset over.

The Real Power Is In You

I tell you this story because it is a situation that I have processed for many years. I started therapy shortly afterward and tried to figure out why I would choose such a relationship with such a toxic person. I was very lucky to have had amazing parents and a fantastic relationship with my brother. I’d always thought of myself as confident and self assured, and yet, here I was, allowing all of these challenging situations.

So, have I forgiven him you ask? I actually have and – unlike many, many situations – he apologized and asked for forgiveness. But that is not why I’m telling you this and also not why I forgave him. That came years later, long after I’d gotten back on the right path and had taken full responsibility for my own actions and the things I allowed.

I’m telling you this story because I had to learn to forgive myself. Because THAT is who is the most important in this story and because I am the reason that I forgave him. The best way to get someone out of your system and never allow them to be a life force again is to let go.

You Are The Most Important Thing

I once heard someone say that hating another person is like drinking poison yourself and then waiting for the other person to die. You hold onto all of that hurt and pain and toxicity, and they go on living their life in the outside world with absolutely no impact from the negative things you feel.

If you were abused or left or diagnosed with a terminal illness or find yourself in any situation where you feel that maybe you could have done more, it is not your fault. You didn’t do anything wrong, you didn’t do anything to deserve it, it is NOT YOUR FAULT. And you owe it to your younger self, your current self, and your future self to let yourself off the hook.

You didn’t do anything wrong and you don’t need to punish yourself any longer. Forgiveness is not about absolving anyone else of what they may have done. It is about not letting it control you, your mental health, or the present moment anymore.

You are in control of your destiny and it is time to take your power back. Whether it’s through therapy, a religious affiliation, meditation, or long walks in a quiet space, you need to find a way to release the poison. Because until you do, you are only hurting yourself. 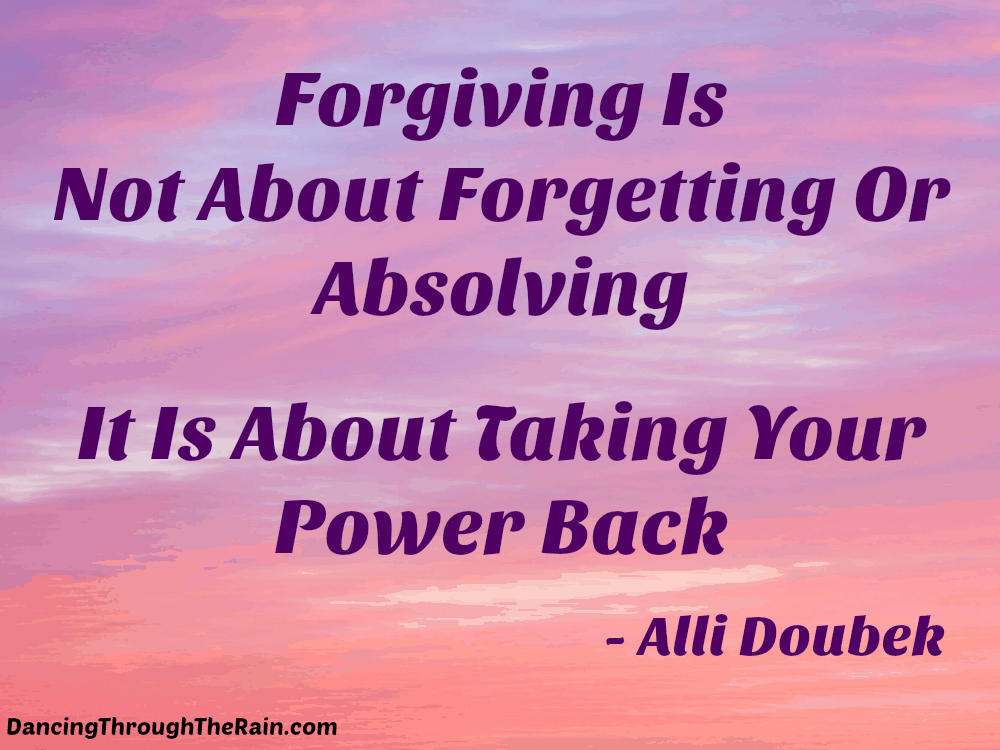