When you strip everything away, there are two choices in life. Get busy living or get busy dying. Make the choice to really live your life. 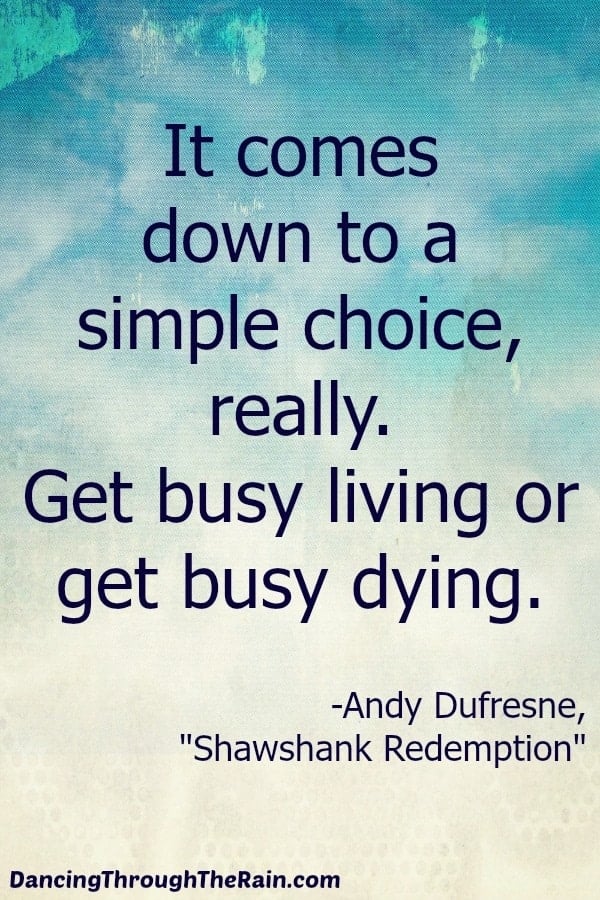 Life is full of ups and downs. It is a roller coaster that sometimes we’d rather get off than climb the next hill. We get tired. Adulting can be difficult. But when you strip all of it down, it really comes down to a very black and white decision. You can get busy living or get busy dying.

I have always identified with this famous line from Shawshank Redemption. Andy Dufresne, Tim Robbins’ character says, “It comes down to a simple choice, really. Get busy living or get busy dying.”

The plot centers around two men that have been convicted of life sentences and reside at Shawshank prison. They become friends over time and while one begins to resign himself to prison life and being an institutional man (Morgan Freeman’s character, Red), Andy dreams of something bigger, despite his physical limitations.

While many people can’t identify with living prison life, the point is that we very often put ourselves in a metaphorical prison. And while we may not be able to fully identify with Andy’s situation, this powerful message applies to each one of us.

When my husband and I were first married, we had dinner with a few people from a car club he belonged to. One of the people at the table was a gynecologist who very nicely asked us if we were “trying or preventing.” Stumbling over my words, I said, “Uh, neither? We’re not planning to have kids this second…”

But in his next breath, he made it very clear. When you are a sexually active adult, you are always either protecting or trying. If you’re not protecting, you are trying, whether you mean to be or not. There is no in-between.

I will remember that conversation for the rest of my life and I hope you do as well. It’s one that I think we need to make clear to our teens and loved ones.

The same sentiment goes for life. You can truly live every day, or choose to live in the monotony of life, waiting patiently to get to the end. It is a choice. It is an attitude. Is your glass half empty or half full?

Hope Is A Good Thing

One of my beloved grandmothers passed away in 1998. I feel unbelievably blessed that I got to spend as much time with her as I did. She was a beautiful woman – inside and out – and one of the most gentle souls I’ve ever known.

I was away at college for much of this year (although we were all very lucky to be with her the day she passed in December), my father moved back to his childhood home to care for her, and my brother’s girlfriend (a qualified caretaker) was helping her during the day, while my father was at work.

My grandmother had cancer that had spread everywhere and was not doing very well. That said, you would never know it. When you spoke with her on the phone, she wanted to hear all about you. When you were with her, she laughed and joked, even from her hospital bed.

Having grown up during the depression, my grandmother never had expensive taste. Eating out was something that she didn’t do often, and when she did, it was almost beyond her.

When she first got sick, she had a quadruple bypass and the doctor told her to cut down on her fats. Everything in her refrigerator became low-fat or fat-free. I don’t know how much you remember about the 1990s, but low-fat and fat-free food? It didn’t always taste like much.

This trend continued until after she got diagnosed with cancer, when my dad, having discussed what was in her refrigerator with her, (both jokingly and seriously) said, “How long do you think you’re going to live?”

Things changed. It became my brother’s mission to treat her to as many foods as he could. And my grandmother? She got busy living – while she was dying.

My brother cooked her filet mignon, got her chop suey and chow mein (because she had heard of them and wanted to try them), Taco Bell, Wendy’s, anything she wanted to try.

She had a few months of indulging in a new life in a way she hadn’t been able to before. And my brother got to help her live.

Now, don’t get me wrong. My grandmother was married, had two beautiful children, was involved in the Civil Rights Movement, had a job, and loved her family. She had lived her whole life, and it was a good life. But the idea that she could keep on living while she was dying has always stuck with me. It was a good thing.

Her positivity, her smile, the fact that she never complained. She is an example that I hope to emulate. To keep living because living is a gift, and there is always more to experience.

Life is hard. Nobody said it would be easy, and thank goodness it isn’t. When we can strip away all of the details, choosing to get busy living is a lot more interesting than the alternative.

It involves joy and pain and excitement and fear and so much more. All of these things turn us into who we are. They help us teach others and they drive us to keep going. The next time you feel truly stuck, ask yourself, what am I doing today that will help me get busy living? 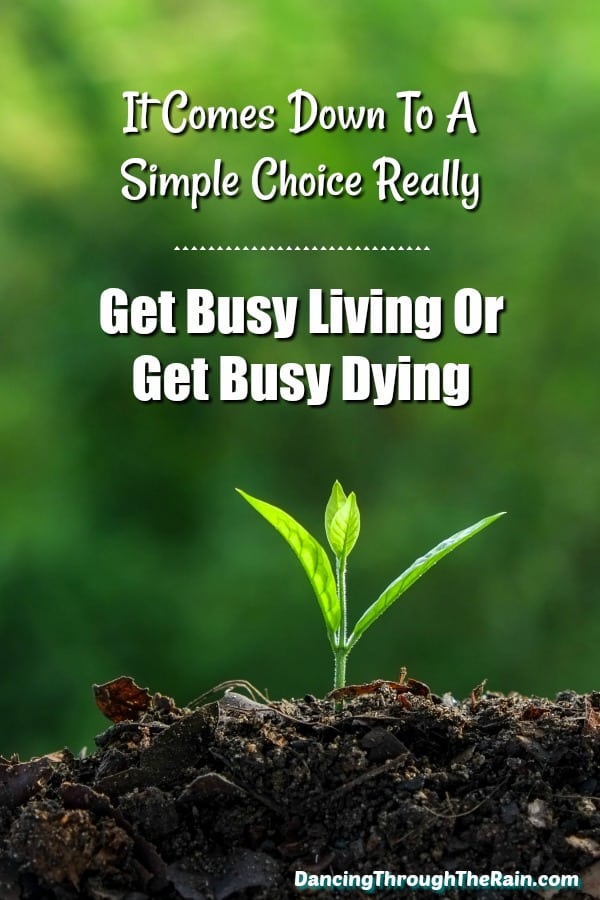