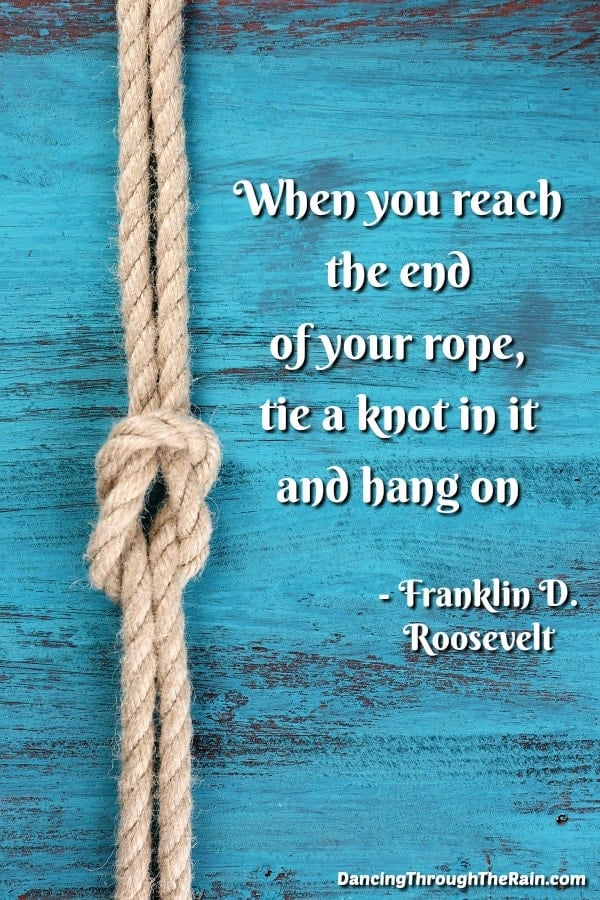 I am an eternal optimist. I can spin almost any situation in order to find a bright side and it has become such a way of life that if you spend some time with me, I’ll have you doing it too. The loss of a job means a new opportunity, three bad things that happen in a row means that hopefully that’s the end of the cycle, and a rained out baseball game means more time for you to dance outside and then be cozy inside. If it happens, I will find a spin. But that’s just most of the time. Most of the time, there is a bright side to be found. But sometimes, things just suck.

There are things that happen in our lives that have us feeling like that piece of time, that experience that we are not just living, but consumed by, is going to be for the rest of our lives. That this is life now – the new normal that you can barely just eek out an existence while living through it. These times have our days or nights feeling so much longer, our minds racing, and our muscles unable to smile. They are difficult, and in those times where you can’t see the end, they are truly our forever.

I have had three genuine experiences like this in my life. I don’t think they happen that often (and if they do, I truly hope you can talk to someone so that you can remember that you are not alone), but they do happen. The first time for me was during a major bought of depression in college. It was awful. My mouth and muscles physically didn’t remember how to smile. I didn’t think I’d ever smile again, actually. That was my normal. After months of therapy and also finding out I had Graves’ disease (and started treatment), I was able to work through it.

The second time was towards the end of earning my Masters degree in business. I had about nine days left and I cried uncontrollably for many days because I didn’t think I would live through the end. I didn’t think I was actually going to die, but I couldn’t picture how this would ever conclude. Eventually it did, as most things do, and I was able to pull myself together.

The third time was in the last six weeks. I mentioned a few months ago that my reflux issues had come to a head. I had to have surgery in order to save both my esophagus and my stomach, since this was the only way to not have to sacrifice one or the other. I had surgery in November to clean my stomach of polyps and also do the reflux surgery, but there were complications and the reflux section couldn’t be completed on that day. In order to have the surgery done (during round two), I would have to follow an incredibly strict diet and then have surgery the day after the diet was completed.

I am a trooper. I may not like what I have to do, but I will get it done. As long as I understand the end goal and see the steps in the plan, I am a fantastic patient. So I went into this diet kind of knowing it was going to be difficult, but putting it out of my head with “you can do this” talk.

The diet was fourteen days total. I had to drink four protein shakes per day (very specific brands to choose from, one of which was Core Power, which I highly recommend if you’re looking) and 85 oz of water or Crystal Light per day. I also had the option of eating as many raw tomatoes, cucumbers, snap peas, carrots, peppers, cabbage or sprouts as I wanted. Nothing could be cooked, no seasonings, nothing else consumed by mouth. Alright, I said to myself, you do what you have to do.

The first three days were tough, but bearable. My family ate dinner upstairs in my husband’s office while I hid in the family room with my computer, a movie, and my bowl of raw vegetables. During the day, it was easier because I could keep hiding while the kids were at school and my husband was at work. I didn’t answer the phone and only responded to texts as I could handle interaction. And then the fourth day hit.

When you are looking at fourteen days of a lifestyle that is literally sucking you dry of energy, fat from your liver (which was the reason I had to do this diet), and brain focus, every hour feels like it has doubled. Every interaction costs more energy, and every hole that you can burrow yourself into looks more and more appealing.

I am someone who gets “hangry” and irritable when I don’t eat, so that was foremost in my mind – I didn’t want to take it out on anyone. My husband and children did the best they could to be my cheerleaders, but it got difficult for all of us. The best thing they could say (and they did) on a regular basis was, “You’re doing great mom/honey” because that was literally all there was to say. They couldn’t tell me it would be over soon, because it wouldn’t. I was in an endless hole of not being able to think clearly, not being able to eat anything satisfying, not being able to communicate well, and not being able to love or give them attention the way that I wanted. I am a communicator and a doer, so my frustration built from day to day. I could have dealt with the lack of food if I felt like I could still be a productive human being. But that wasn’t possible and fourteen days felt like 100 years.

So okay, let’s look ahead to the future, I would tell myself. After this, what can I eat? Let’s look for some hope. But the hope that I saw was surgery. I was going to go through all this and my reward was… surgery. And then weeks of a pureed diet. In my energy starved mind, there was honestly no winning this one. Which was the day that I decided that I was going to write this post.

Sometimes things just suck. They just do. There are life events that are awful, and painful, and consume your entire existence. And it just is what it is. But whether we ever think we’ll get through it or not, things do change. We honestly don’t think they will, but time continues and days pass. And eventually, you are on the other side.

Sometimes the best thing that you can do is hold on. You don’t have to be positive or negative or even communicative, but you do have to hold on. Wait for time to do its thing when you can’t do anything more than you’re already doing. That doesn’t make the experience that you are going through any easier or more tolerable or any less lonely, because in that space, we do feel alone. There are people who we love and love us, but unfortunately they can’t penetrate the bubble of suck that we are living in. I know it. I’ve been there and although I hope I’ll never have to be again, I’m sure there will be more of those experiences down the road. Because life isn’t easy for any of us, but it is worth living. And the times that suck? They really will pass. You just have to keep holding on.