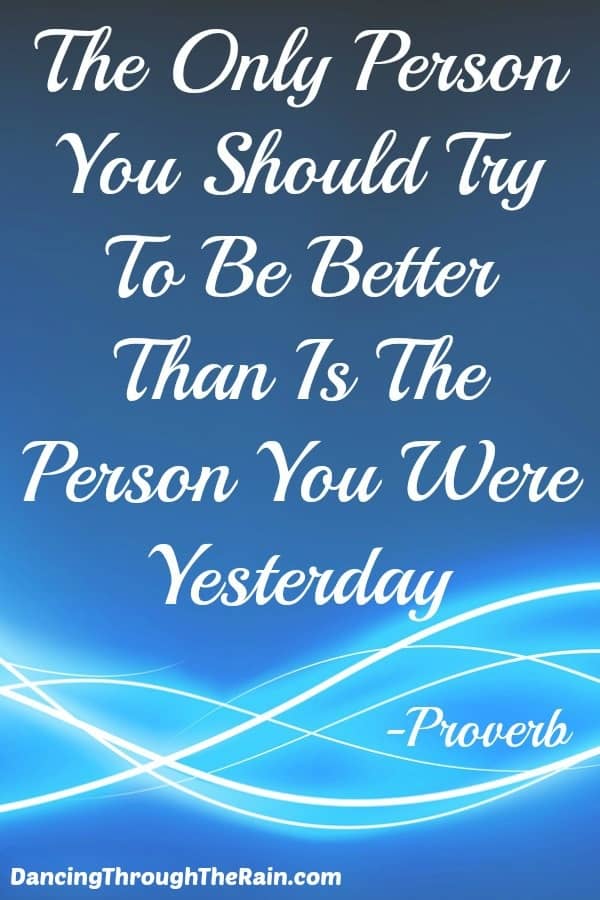 Be Better Than You Were Yesterday

Competition is a beast. Some love competition, some loathe it. Interviewing for a new job, auditioning for a role, playing a sport, going on the Bachelor – it is all a competition. We size up the other people that we see and try to decide if we have a fighting chance or whether we’ll be the victor. But the truth is that there is only one competition that you really need to pay attention to, and that is the competition with yourself.

While we are moving through each day, living our own lives, it can be easy to envy others. You see successful people with their natural ability to accomplish everything, launching themselves in such little time.

What we are actually seeing, however, is a collection of moments in someone else’s life. We miss their daily routine and a whole lot of extras that take place while we aren’t around. Each of those people is a human being living their own existence, and when you come right down to it, they are not your biggest competitor. You are.

Be A Better Person Today

When I was younger, just out of college, I got a job as a case manager at a home for the chronically mentally ill. It had 174 beds and, at any given time, 170 or more were filled. Diagnoses ranged from psychotic disorders to depression and I knew most of the residents well.

I loved that job. Loved it more than I can explain with words. I understood the residents I worked with, I was happy to be there for them, and I learned a great deal in the process. My supervisor at the time was one of six senior staff that fell just below the administrator of the facility. There were six floors and just enough staff to cover each one.

After about nine months at this facility, I started to get a little bit antsy. I would have loved to work with the residents there every single day for the rest of my life, but I began to be uncomfortable with the negative issues, personalities, and politics within the staff, so I began looking for another job.

I had discussions with myself about how much they might offer me (and the absolute bare minimum that I needed to pay my bills), what the vacation time would be like, what my responsibilities would be, and hoped beyond hope that I would get the job just so that I could continue to work with these residents. That said, I was prepared for a conversation.

On my 24th birthday (a complete coincidence), I was offered the position of Admissions Coordinator. I gladly accepted and sat down to hear about what came with this job. The administrator of my facility informed me of my pay (significantly lower than I’d hoped and just enough to cover my bills), vacation (average), and responsibilities (a great many that I was excited about).

I never said a word. I didn’t try to negotiate, I didn’t answer that awful, nagging feeling in my gut, I just listened and nodded. And I took the job. I thanked him and walked out of his office, knowing that I was thrilled with the opportunity but disappointed in myself.

Why had I not spoken up? Why did I allow this nice businessman – who had an agenda to low-ball me so that he could have free-flowing money elsewhere (as was his job, so no criticism) – to intimidate me? I had practiced this conversation many, many times, so what happened?

Perplexed but not discouraged, I started my job in admissions and learned all there was to learn during my training. Once I was left on my own, I spent a lot of time driving to hospitals to interview patients for possible placement, went to visit any of our residents in the hospital, and consulted with our nursing staff at my facility.

During one of the first consultations with nursing, the head nurse left the room and I was alone with the assistant head nurse. She turned to me, congratulated me on my new position, and asked what I was going to do next. I was confused. I didn’t think I’d heard her correctly and explained that I just got this job and was going to perform to the best of my abilities. She responded by telling me that was great, but what was I planning to do next?

This was truly a question I couldn’t conceive of at the time. Next? I just got here. I wanted to love here for a little while! I don’t remember how that conversation ended, but I know that it has stuck with me ever since. This question – asked by someone older and much wiser than me – has made a huge impact on my life.

You Can Be Better Than Yesterday

Those two instances in my life helped shape me and taught me huge life lessons. If I could have gone back and renegotiated, I would have, but I couldn’t. It wasn’t one of my better days, but it turned out to be a beautiful thing. And in the end, I had the best time with my residents.

The only thing any of us can do is try to be better today than we were yesterday and be better tomorrow than we are today. Try to be a better person for yourself and keep moving in the right direction.

In this world of social media, it can feel impossible to keep realistic expectations, but that is the ultimate goal. Make better use of your time than spending a long time scrolling through the fairy tale that other people present. It is better for your mental health to focus on you since you are the only person you can control.

Learn a new skill. Do some good things for your neighborhood. Live today with the simple goal of having a positive attitude. Try to be the best version of yourself through the end of the day each day and watch how things begin to change.

The only person you should try to be better than is the person you were yesterday. The real power, the real magic, the real accomplishment is within you and can’t be found by trying to be better than other people. Be your best you, each and every day. And if today is a bad day and you don’t have the energy to be your best you, try for tomorrow. It’s in there, I know it. 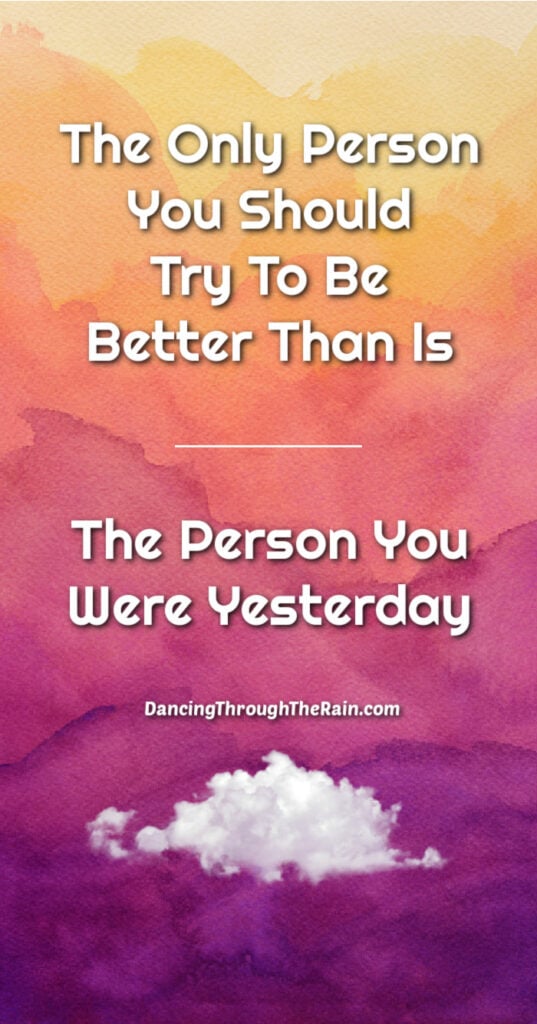