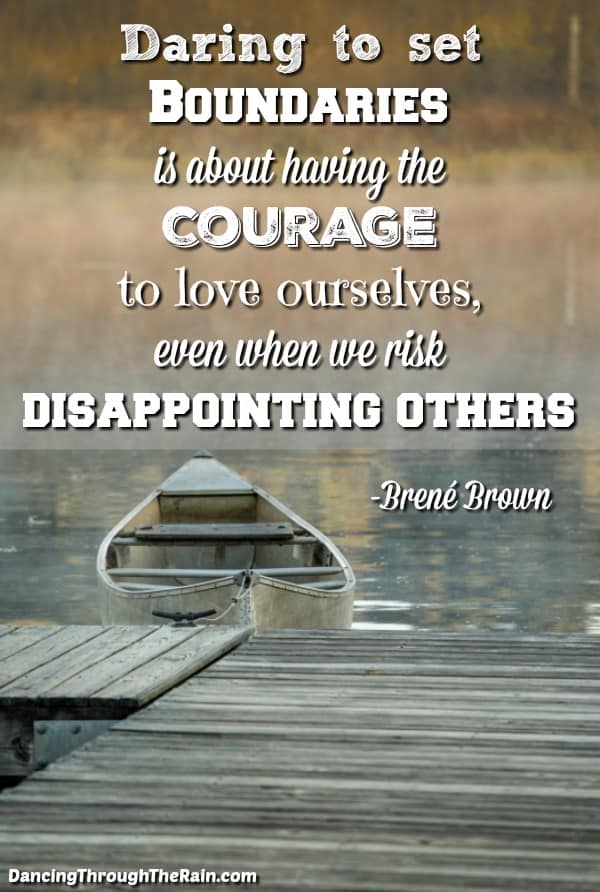 When we are babies, we learn the most basic words first. Mama, dada, up, yeah, no – all of the little words that incorporate meaning and help us to begin to explain what is happening within ourselves and our relationships to things. We learn about the people who love us, the surroundings that we are in, and all of the little steps that come after – both literally and figuratively. We grow into who we are.

Sometime between those first words and years later, the word “no” begins to take on a negative connotation. It means that we refuse to do something, that we are rebelling against teachers or parents, and/or that we refuse to cooperate. In movies, there are a plethora of scenes where you see the teenager scream “NO!” and slam their bedroom door. It is also the word that we hear uttered during times of tragedy and heartache as well as times of fear. It becomes a word that people don’t like to hear – and many don’t like to say.

This is the rub. The word “no” is so much more than all of the things above, but it becomes tougher and tougher to say as we get older, based on who we are saying it to. When you say “no” as a child and you are told to cooperate, you have a moment of understanding that your putting your foot down isn’t always the final say. You tried it and someone explained why it just can’t be that way. As a parent, I know that these moments come up a lot.

If your six year-old child wants to go to school with no bottoms on, flat out refuses, and screams “NO!” – we all know why they can’t win that argument. You can’t go to school wearing only a shirt and underwear buddy, sorry. But understanding the smaller message that is sent is just as important as setting the clothing limits you are setting.

In all actuality, the word “no” is not a negative word. It is a strong word. It is a word that we use when we want to express a boundary. Whether that boundary is something that we are enforcing in order to take care of our physical safety or our mental and psychological safety, it is a boundary nonetheless. It is a declaration that this is the limit of what is acceptable and now it is in the other person’s court to react or reply.

That said, the word “no” can be hard. If you have always been a people pleaser, like I have, the word “no” comes with a lot of guilt. It has taken many years for me to be able to set limits, say “no,” and express that I can’t do any more than I’m doing – but I am able to do that now. It is a big step that I’m very proud of – but it comes with a lot of guilt, and I know I’m not alone in that.

When you say “no” to someone, you are telling them that you can’t do what they want. That you have to put yourself first. Sometimes their request is reasonable and sometimes unreasonable, but regardless, there is often a guilt associated. There is that, “If I could just do a little more… give a little more…” that may cycle within you, even when there’s nothing left to give.

The thing about finding your “no” is that if you don’t, there are consequences. When you constantly say “yes” or “I guess” – when you consent to any situation because you have not refused – resentment and unhappiness begins to build inside. When you wait for the other person to limit themselves or tell you that you’ve done enough – it just isn’t going to happen. We are the only ones who can control our lives, our limits, and what we are willing to give or tolerate. And unless you find a way to say “no,” nobody else is going to do it for you. At least not consistently.

Which brings us back to boundaries. Whether you know it or not, you have already set many boundaries in your life. Maybe you ask people to take off their shoes when they walk into your house. Maybe you have decided that you and the kids sleep in your own beds instead of one massive bed. Maybe you have decided that no one touches your hair other than you. There are all kinds of boundaries that you have chosen because they make you more comfortable in your world – and you have a right to those boundaries. In the world that you have been creating for yourself since the day you were born, it is up to you to decide what you are willing to tolerate and where you are willing to negotiate.

Boundaries are about asking for and requiring respect. Respect for your time, respect for your space, and for your ability to do – or not do – the things that are asked of you. I am not talking about job requirements or other situations where you actually have a responsibility to complete a task. I am talking about whether you are willing to answer the phone if someone calls at 6:30am. That is your decision. It has to do with your space – your personal world in which you should always feel safe. And whether or not we wish that someone else would help us create this safe space, sometimes we have to do it for ourselves, which requires the word – or action – “NO.” 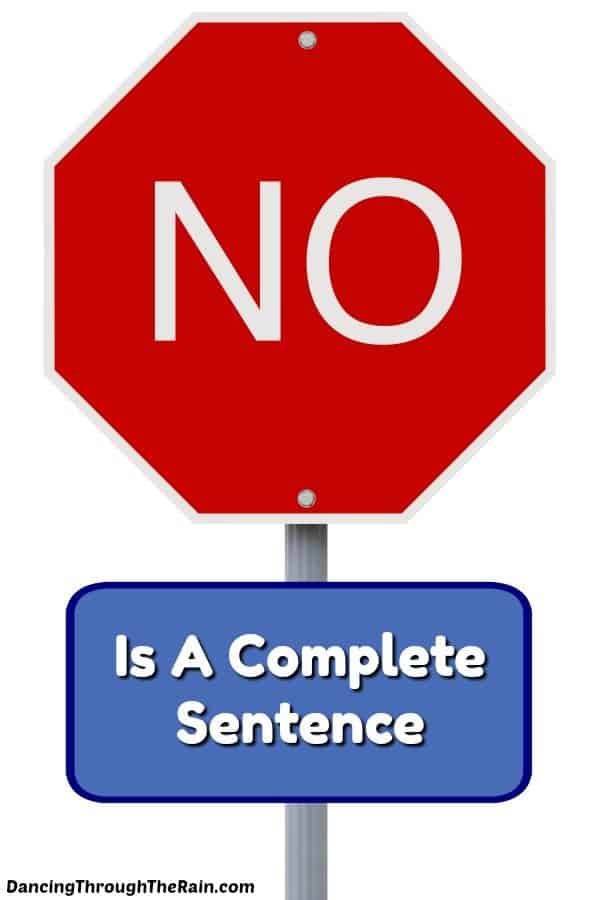 So what do we do if someone keeps calling at 6:30am and waking us up on a Saturday? You have answered every time – irritated, but answered. They just won’t stop and it is driving you crazy. First, think through why this is happening. The message that you are sending when you answer the phone is that you are willing to give in. That regardless of how irritated you are (which unfortunately isn’t enough to get the person to change their behavior), you will answer the phone, be there for them, and ultimately not hold it against them.

If this is a situation that bothers you, it is time to think through the possible solutions. First, tell the person that they can’t keep calling as early and give them a time where you will accept calls. Are you up at 8am? Do you want to be up at 6:30am, but have an hour and a half of peace and quiet? It is the same thing. You are unavailable until 8am. Tell them so. You can do it as sweetly as possible should you feel the need, but set the boundary.

If this doesn’t work (and often, it won’t), you could turn the phone on silent. What you can’t hear, you can’t answer. They still have the opportunity to leave you a message and since you have given them the time you are available, this won’t be shocking. Especially when you call them back (at your leisure, and after the time you’ve stated) and reiterate that you were unavailable until that time. You teach people how to treat you, and if you aren’t the one designing the situation, many people – those who love you, those who need more than you can give, and/or those who just aren’t thinking – will do their best to design it for you.

In this day of cell phones, email, social media, and text messaging, there are many, many ways for people to gain access to you. In many ways, this is a fantastic thing! If your cousins are in Italy or Thailand or Japan, they are now just a few buttons away. In other ways, it is an invasive thing. Finding ways to take care of yourself has become harder – unless you unplug.

A very smart person had to have a “talk” with me about the phone a few years ago. When I was little, I was taught that if the phone rings, you answer. That was common courtesy 40-something years ago. It is what you did. That was how people communicated. But now, things are different. There are so many ways for people to get in touch with you. We aren’t reliant on phone calls the way we used to be, so maybe it’s time to change the way you think about communication.

When the phone rings, you need to make a decision. Are you in a place (at this moment in your day, physically and/or psychologically) where you can stop what you are doing and make the caller the priority? If yes, awesome. Pick up the phone and chat. If you are working, fixing the car, taking a bath, or anything else where it is not the right moment, don’t answer the phone. Again, the phone isn’t the only option – there are other ways to contact you (which you will see or hear when you have the time) or you can call them back. This is you setting a boundary.

Our guilt from setting boundaries stems from wanting to do everything and take care of everyone. It’s a nice thought, but it is also impossible. If you do take every phone call, answer every request, drive to every place, run every errand, and spend all of your time on other people, you will have nothing left to take care of yourself. That may sound selfish, but when your car is running low on gas, you get some more. Your personal fuel needs to be refilled as well. You can’t keep giving until you are running on fumes and then expect yourself to keep going. You are not in charge of anyone else’s happiness – only your own.

At the end of the day, it is about giving yourself permission to take care of you. Many times, you won’t get it from anyone else because they are so busy trying to take care of their own needs that they don’t realize they are impinging on yours.

If it is too difficult to give the permission to yourself, I give you permission to set boundaries. I give you permission to take a few minutes and think about YOU so that you can put yourself on a path to a happier, peaceful life that you can experience more fully because you aren’t running on fumes. No one can ask a car to keep driving when it is down to the last drop of fuel and you can’t ask the same of yourself either – no matter how hard you might try. Take care of yourself, my friends. It all starts and ends with you.