It Is Not The Years In Your Life That Count, It Is The Life In Your Years. 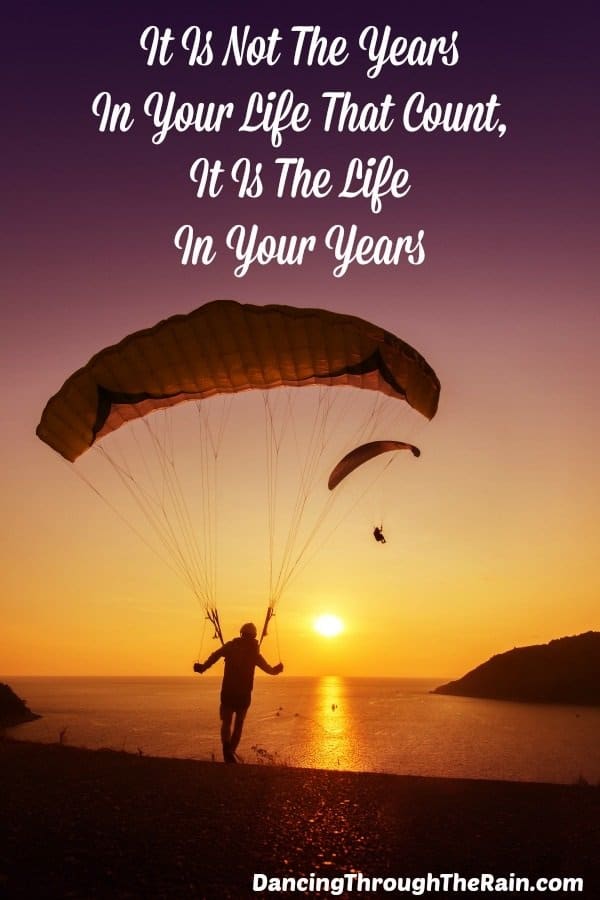 It is not the years in your life that count – it is the life in your years. Abraham Lincoln, our 16th president, has been credited with that inspirational quote, but it’s not clear who actually said it. There is evidence that presidential candidate Adlai Stevenson II said it in a 1952 speech and that it was used in print in 1947 while promoting a self-help book by Edward Stieglitz, but there is strangely no evidence that it is an Abraham Lincoln quote.

Regardless of who said it though, there is a reason that it is one of the memorable quotes that people repeat. It’s true.

Life is precious. We are beings with no real answers about why we are here and what we are supposed to be doing. Many of us have religious and scientific beliefs about the answers, but no one really knows. What we do know, though, is that life is precious, fragile, and ultimately – up to us.

It Is Not The Life In Your Years That Count

Some of the most influential people in history have been those with short experiences on this planet. Mattie Stepanek – a gentle soul and frequent guest on the Oprah Winfrey Show who passed at only 14 due to complications from Dysautonomic Mitochondrial Myopathy – wanted to be remembered as “a poet, a peacemaker, and a philosopher who played.” I remember seeing both him and his mother on those Oprah episodes and they’ve stayed with me. Not because of his life challenges, but because you could really see who he was and what he hoped to contribute in the present moment to a world that he knew he wouldn’t be long for.

Ryan White died at only 18 after contracting HIV from a blood transfusion, but became a spokesperson for the entire HIV/AIDS community. More than 30 years after his death, his name is still remembered for his contributions to community awareness.

Janis Joplin, Jimi Hendrix, Kurt Cobain, Heath Ledger, Tupac, Georges Seurat, Vincent van Gogh, James Dean, Marilyn Monroe, and so many other artists had a short number of years here, but left their stamp on this world before going. We look at and listen to their art so often that we forget that they aren’t still physically with us. We actually have to remind ourselves sometimes. It is not the amount of time that you’re here, it is truly what you do with it.

It Is The Life In Your Years

You don’t need to be a visionary, an artist, or a public speaker to leave your mark. You can leave your kindness, your hugs and kisses, stories of your youth, your talent for knitting, or so many other things. The mark that you leave can be with hundreds of thousands of people or only a few that matter greatly to you. The point is to put yourself out there and not get stuck. Make yourself just a bit vulnerable so that you can connect with people (as many or as few as you are comfortable) and live your life so that they see the real you. This is your great adventure, so make the most of the years of life that you’ve been given.

Not comfortable with vulnerability? Go climb a mountain with a friend. Try one of those indoor skydiving places or head over to a skydiving center and try the real thing. Don’t worry so much about how much life may be ahead of you while you still have time to enjoy the world around you.

At the end of our lives, we won’t be thinking of things like deadlines or phone calls to clients that we meant to make. We will be thinking of the people that we’ve loved and the experiences that we’ve had. Make sure you are including some “real life” in your years.

One of the songs that I always come back to is “I Lived” by OneRepublic (below). Give yourself the gift of bookmarking it so that you can listen when you need, add it to your streaming library or purchase it and keep it with you. It says all of the things that we need someone to tell us sometimes.

Enjoy the life that you were given to the fullest so that when you are at the end looking back, you can say that you lived. That’s the good stuff.