Disclosure: This event and trip to NYC was an all expense paid adventure sponsored by Lionsgate. All thoughts and opinions are my own. #MyLittlePonyMovie 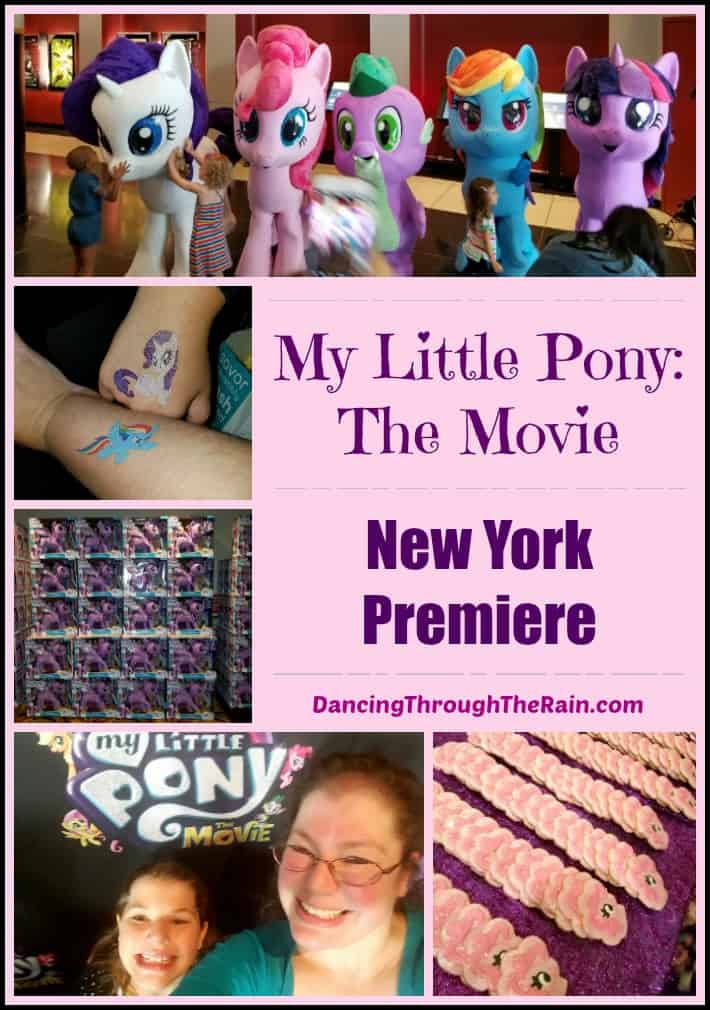 “My little pony, my little pony…” was one of the theme songs of my childhood. I know you know it – and that the song is probably making its way into your consciousness right now. But while you hear the “My little pony” part in your mind, did you realize that the entire song is actually about friendship? I don’t think I ever did – although it’s not surprising. My Little Pony is about friendship. 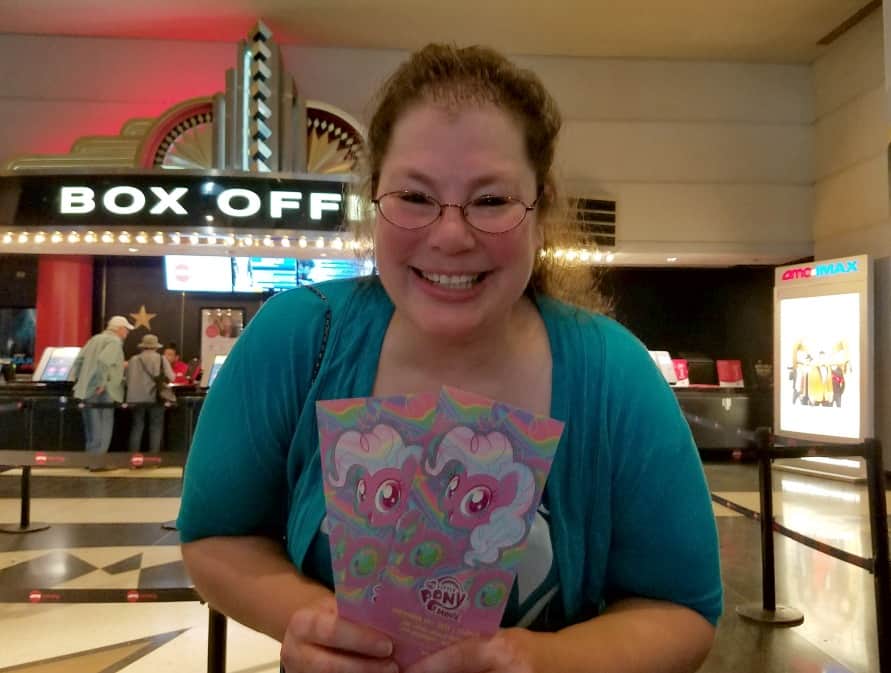 I was recently invited to go to New York for the My Little Pony: The Movie premiere – and my 9-year-old daughter came along as my date! The perfect outing for a mother and daughter weekend, I thought. 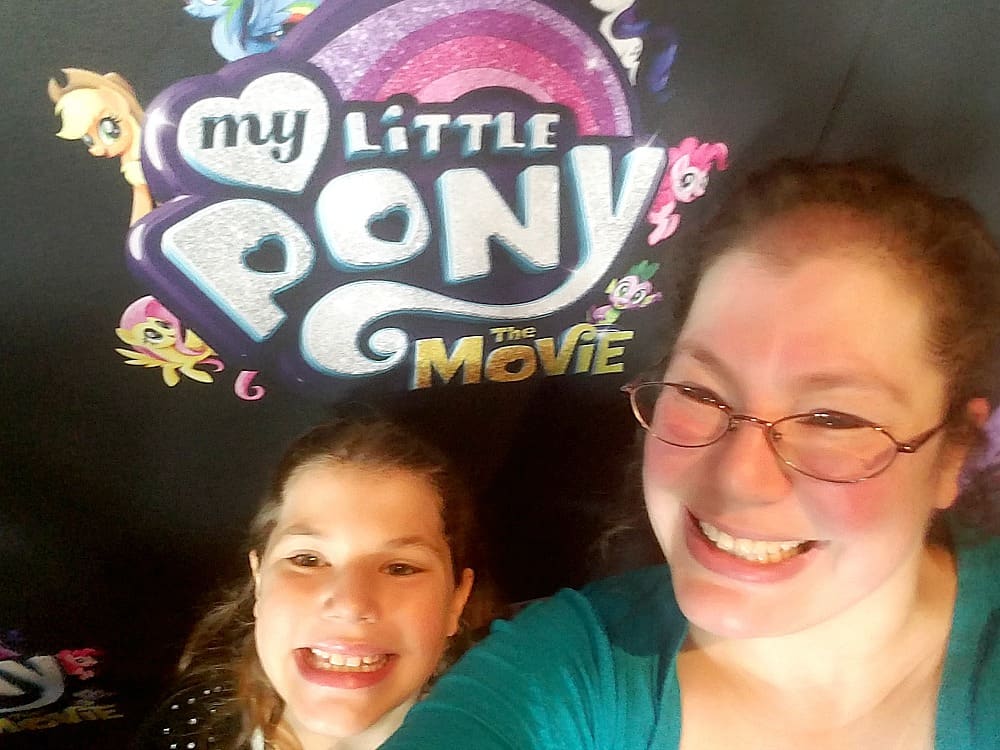 Walking in on the pink carpet, we took our first photos to memorialize this fun event. There were life-sized pony characters walking around the room, shining a little extra color everywhere, a huge rainbow balloon arch welcomed us toward the theater and Princess Twilight Sparkle figures lined an entire wall.

All in all, it was amazingly bright and fun! 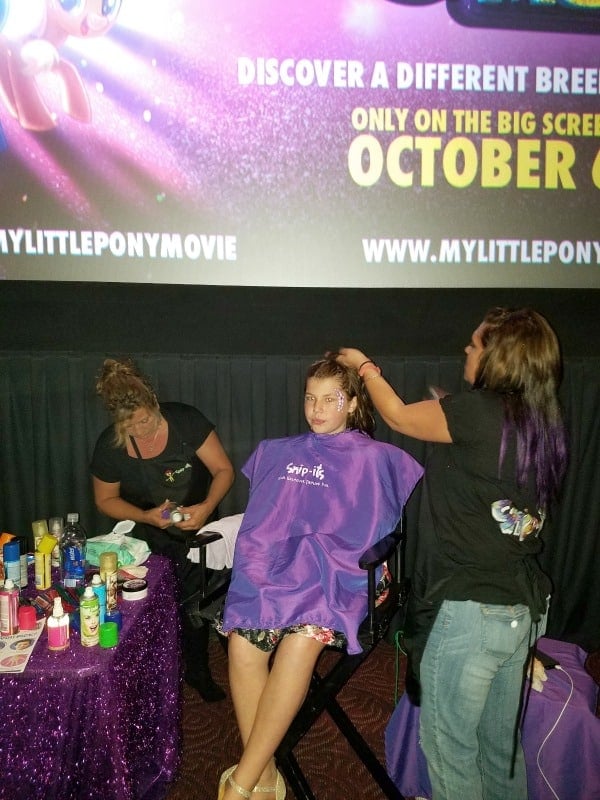 In the theater itself were opportunities to get “pony-fied.” (That’s what I’ve named it!) There was a section for face painting, temporary pony tattoos, and hair “treatments,” which allowed you to have colors and glitter. 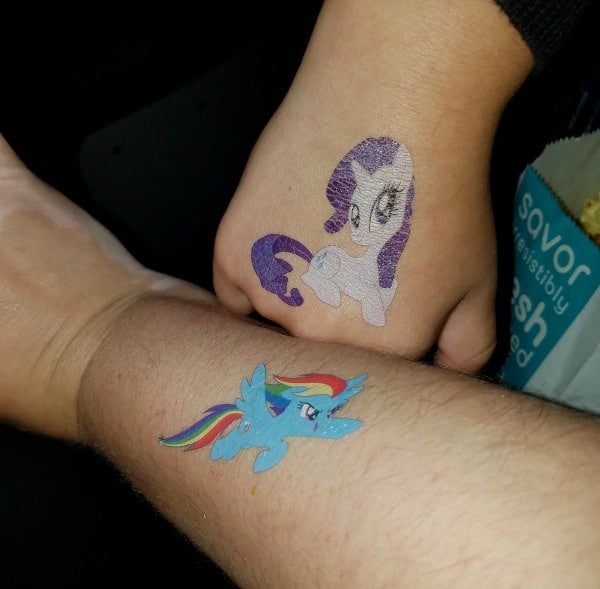 My daughter took part in all of the activities, while I just went for a tattoo. I liked the idea of Rainbow Dash flying up my arm! 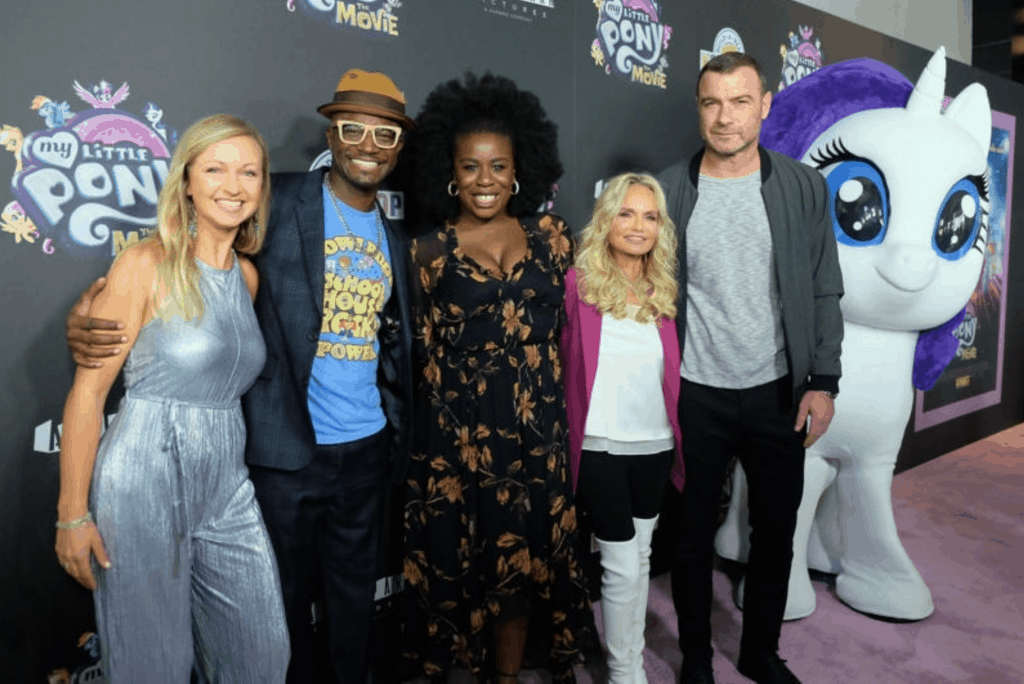 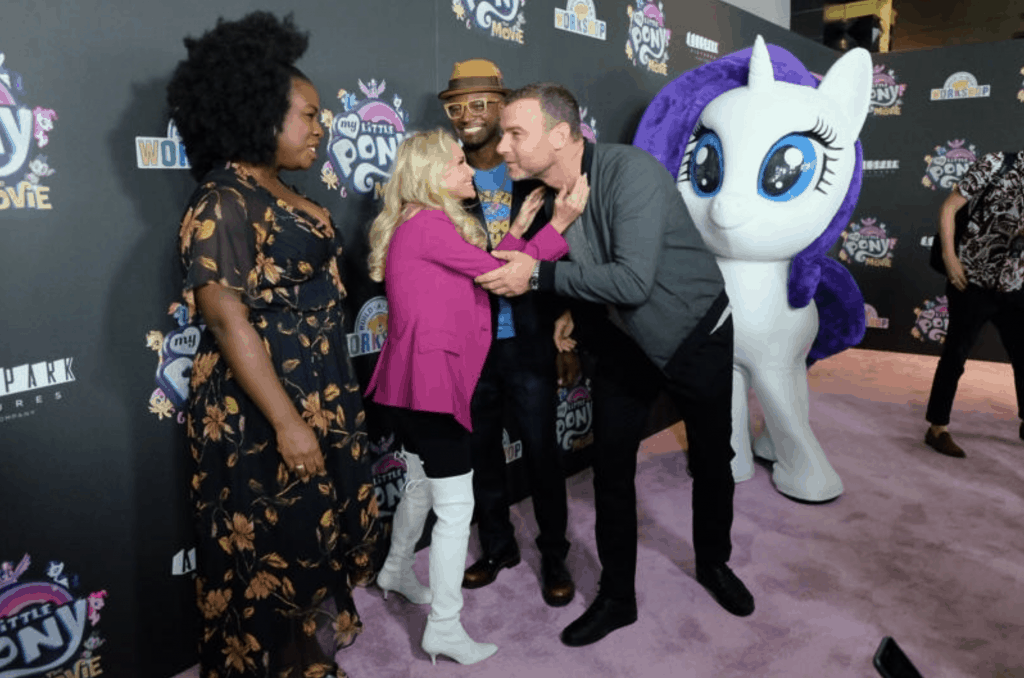 While I didn’t have the chance to interview or talk to any of the actors in attendance, they were all smiles and appeared to be ready to see their new feature film! 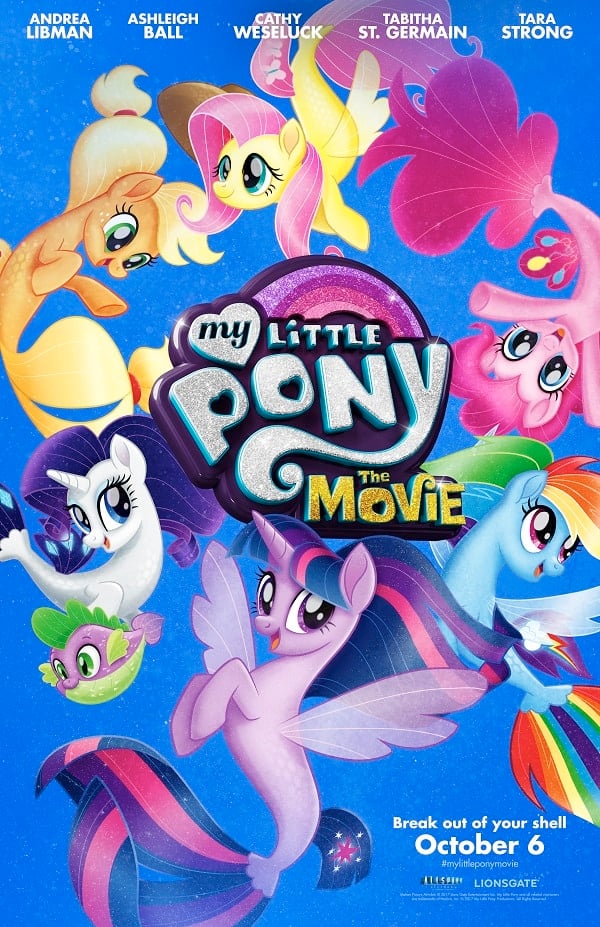 **MOVIE SPOILERS PAST THIS POINT**

Now, on to the movie. My Little Pony: The Movie is a very cute animated film about friendship, redemption, and personal growth. It “stars” the Mane 6 – Twilight Sparkle, Applejack, Rainbow Dash, Pinkie Pie, Fluttershy, and Rarity – and follows them as they try to save Ponyville from evil forces. As the six friends flee their home to try to find a solution to their problem, they meet new friends and have excellent adventures.

There are a few things that I really enjoyed about this movie. First, one of the main themes is friendship. The friends spend much of the movie together, but they don’t always get along. Some of the ponies have independent ideas of how to solve problems (which they communicate to the group) and others make choices that ultimately get them in trouble. You also get to witness an argument between friends that results in their separation. That said, it is the fact that they argue, hurt each other’s feelings, and then find their way back to each other that is really the lesson. This happens! It is not a bad thing for our children to see what it is to disagree with a friend and then still be there for each other.

The other mane theme (See what I did there? I had to, I had no choice) focused on one of the “bad” ponies, Tempest Shadow. When you first meet her, she is seemingly evil. She is the one who has tried to take over Ponyville, which is what led to the Mane 6 escaping. Tempest chases them and declares a few times that she will show everyone what she can do if only she can get her horn back. If you hadn’t noticed before this point, her horn appears to have been broken off. Later in the movie, you see her backstory. She was a young pony with friends when her horn got broken off in an accident. After this, she no longer functioned as she once had and it scared her friends away. She found herself alone, and continued on to get angry and want to retaliate. The Storm King (the major baddie) had promised that if she helped him to collect all of the magic from the princesses, he would restore her horn.

In the end, Tempest learns that The Storm King wasn’t her friend and was only using her. When Princess Twilight Sparkle shows her what friendship really is, Tempest realizes where her allegiance should lie, and attempts to shield her new friend. In the process, The Storm King is destroyed and Princess Twilight Sparkle saves Tempest. At the very end of the movie, there is a moment where Tempest refers to feeling “less than” due to missing her horn. With a little encouragement from her new friend, Tempest goes on to show that she has positive powers and has strengths that she can be proud of. This was my absolute favorite moment of the movie – and I was truly proud and relieved to see that the movie production chose to leave her just as she was.

There is a huge lesson for our children to learn here: We are enough just the way we are. Some of us have physical challenges, emotional challenges and/or psychological challenges, but we are enough. Our children are enough and have strengths that they should be very proud of. As a parent and advocate of all people who face challenges (which – let’s face it – is every single one of us), it meant a lot that I could show my daughter a movie where an antagonist didn’t suddenly change into a sparkly dress and become something different when she “became good.” Tempest had a troubled childhood and upbringing, but she learns that her challenges are just part of what made her who she is. And that is a lesson in this movie that I would be proud for every child to see.

Overall, this event and movie were a fantastic experience. If you take your child, come back and let me know! I’d love to compare notes and hear what you thought of the movie. Enjoy!