Learning the difference between helping and enabling is a tough one, but allowing someone to face the consequences of their actions is often when they learn the most. 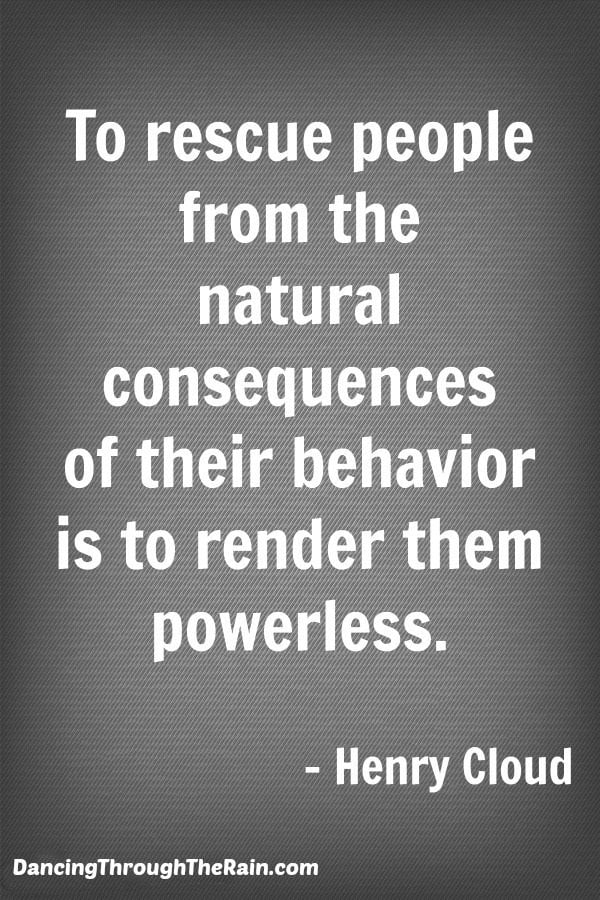 To rescue people from the natural consequences of their behavior is to render them powerless. – Henry Cloud

I’m a pretty big Dr. Phil fan. I have always liked his straightforwardness and I appreciate his insight. My background is in psychology and working with the chronically mentally ill, so the things that Dr. Phil says and the methods that he seems to follow are paths that I feel I’ve been down before.

I appreciate it when people are straight-up with me. I’d much rather you take three minutes to tell me how you are truly feeling than dance around an issue for a week. Not to be too blunt, but none of us has time for that! I want to know and I want you to tell me so that we can work to get through it.

A few weeks ago, I was watching a Dr. Phil show about a mother and daughter who were so enmeshed that the mother expressed her hatred for her son-in-law, who “took her daughter away” from her. The daughter visited her mother for hours almost every day and felt that she was in charge of her mother’s happiness.

The mother usually forgot to take care of herself, forgot to eat, and would make choices to manipulate the situation. (Although, this is a television show – I am aware that we may not be given the entire story.) One of the things that Dr. Phil said to the daughter that stuck out to me (and which I promptly wrote down because it applies to so many situations) is, “Stop protecting her from the natural consequences of her behavior.”

I have had “natural consequences” on the brain for about the last ten years, but I’d never heard it put this particular way – and these words resonated with me. I think that we are all aware that when there is an action, there is a consequence. Whether that’s good or bad or happy or sad isn’t the point. When “A” happens, “B” happens.

If you throw a rock up, it will fall down. Those of us who are parents and siblings and grandparents and friends also know that sometimes you feel the need to step in when you see someone you love making (what you think is) a mistake. And sometimes you should. It is our job to look out for those we love and I would agree with that implicitly.

But sometimes looking out for them means letting them face consequences. Sometimes it is not in their best interest for us to protect them from the natural consequences of their actions.

There are many levels of this to consider, of course. If a child reaches into a fire, you tell them not to do that or they will get burned. If a teenager gets into a fight over the “honor of one’s mother” (or the like), you talk to them about what might be a better or different choice (if that’s what you believe).

If a college student signs a lease and doesn’t have a job set up, you figure out how to make this into a learning experience, help them find a job – and do your best not to get too upset. But if that same child is now thirty, signs a fifth lease, still has no steady job, and still looks to you to bail them out, maybe it’s time to stop protecting them from their poor choices and such immediate consequences.

Here is what we know about human behavior: It is easier to do what’s easy. If you and I go to the movies every single week and I always “forget” to bring my purse, knowing that you’ll pay, we have now set a precedent. I’m going to take advantage of you and you are going to be the sucker. We have both agreed to this unwritten contract and we will continue to go to the movies every week – on you.

If after that second week you look at me and say, “That really stinks that you left your purse at home! Why don’t we meet up for a walk in the park next week? I’m going to go to my movie. Bye!” you’ve set a very different precedent. I might have second thoughts. I now don’t get to go to the movies, I know that you aren’t as easy to take advantage of as I thought, and I know that you don’t see me as a victim who needs to be saved. So then, it is all on me to either change, pout, and/or look for a new victim, but you are off the hook and I have to deal with the consequences.

This last Thanksgiving, my 11-year-old son decided that he wanted to wear shorts. We were driving to my mother-in-law’s house and then my mother’s house, so we would be gone for a good eight hours of the day. It was about 45 degrees outside (which most Chicagoans can tell you is more like 60 in our minds – yes, I wear shorts when it’s 50 degrees) and we’d be in the car or a house for the majority of the time we were away.

I mentioned putting pants on because of the weather (as did my husband), but my son was set on the shorts. My comment about this was, “Okay, that’s fine if this is your decision, but I don’t want to hear about it if you’re cold!” By the time we got to my mother’s house that evening, my son (who never once complained) kept his jacket on. Because he was cold.

These were the natural consequences of his actions. You choose to wear shorts when it’s 45 degrees? You might be cold. (For the record, I always have blankets and extra jackets in the car, so his decision could have been altered by me if the car broke down, an emergency happened, etc.).

A lot of people will not have the same parenting philosophy as me, but I believe that these moments – where no one is going to get hurt, burned, poisoned, or frozen – are the teaching moments. And the next time he decides to wear shorts on a 40-something degree day, we can have a discussion about what he just experienced on Thanksgiving.

This is a small example in a huge field of situations. It is the same advice – on a larger scale – that you hear from therapists, drug interventionists, life coaches, and other professionals. It is our job as loved ones to try to help those we love and try to do good deeds, but when you love people into helplessness, you are not helping them – you are helping yourself feel less guilty.

It is the same as the old saying, “Give a man a fish and you feed him for a day; Teach a man to fish and you feed him for a lifetime.” When you are made to face the natural consequences of your actions, you are forced to learn to fish. Take care of yourself and those you love in the healthiest way you can. It isn’t always easy, but when something is easy, it is not always the best choice.