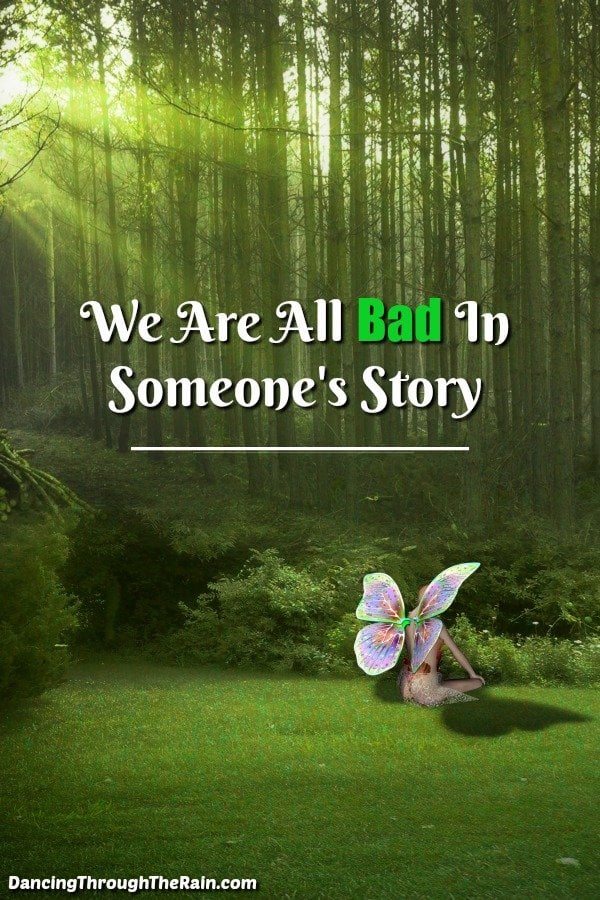 We Are All Bad In Someone’s Story

I think that for the most-part, people try to be good. We try to be our best selves and try to either move through life without hurting anyone or touching too many people. But the truth – the hard truth – is that we are all bad in someone’s story.

How can that be, you ask? I’m not bad. I try my hardest, I do what I can, I open doors for other people… Regardless of how much we do to help others, be there for others, and take care of the world, we do leave other marks. The things that we do in a split second can leave a positive impression or a negative one.

When was the last time you honked at someone in traffic? They were sitting at a green light checking their phone and you’d been waiting a full five seconds for them to move. I’ve honked at that person!

When was the last time you hung up on someone calling about a political campaign or had a child who acted up at a restaurant and it took you three minutes to walk them outside? Do you have memories of talking about a classmate behind their back when you were in school or putting the blame for something on someone else so you wouldn’t get in trouble? We are all bad in someone’s story.

Now, there are a couple of ways that you can think about this fact. First, let it be freeing! So many of us strive for perfection. Since perfection is absolutely unattainable (we wouldn’t exist if it was!), we try for the next best thing. We do everything we can, even sometimes feeling guilty that we didn’t do more. That is completely normal, but it’s also unfair to ourselves. We’ve done things that aren’t ideal and we will continue to do them, whether we intend to or not. Aim for higher and give yourself a break.

Second, let your experiences be a better influence on others. Tell your kids what may have happened when you were in school. Tell them how you feel badly that a friend heard about you gossiping and it has always stuck with you. Try to convey that you want to do better and you hope they can as well. Let them know if there were any consequences to the relationship, even if it was just the sorrow that you have secretly held all this time.

Third, and this may sound strange, but how did you react to the people who are bad in your story? I don’t mean the people who left scars necessarily, but the people who were unkind to someone in front of you or let the elevator close right when you were about to get to it? Did it make you angry? Irritated? Stronger?

It is important to remember that the things that bug us or bother us or make us angry are also the experiences from which we grow the most. Anger is not an emotion that we willingly embrace in American culture. It is looked at as a flaw rather than an emotion. Of course, if we release our anger in an unhealthy way, that is unhealthy and bad for all of us. But if you allow the anger to fuel your desire (and actions!) toward change in some way, it can actually be a very valuable emotion to connect with.

Lastly, remember, you are bad in someone’s story. Their story, not their life. It is up to you whether you continue to play that role or apologize for what may have happened in the past. As we age, certain things have less meaning. We remember them as part of our history, but they just don’t matter as much. If there is something that you feel sorry about, make amends. It is never too late if you really mean it. The worst thing that can happen is that the person doesn’t accept, which would be heartbreaking, but you have no control over that. You only have power over your own life, so make the decisions that sit the best with your soul.

There are a number of times that I remember being the bad person. I’m not proud of them and I have actually apologized to various people years later. In one instance, I sent a pointed letter to a friend in high-school and it was unnecessary. It hurt her and I felt terrible, but I was a teenager and made a really stupid mistake. I have always wished that I could have talked to my teenage self before I sent it. As a twenty-something, still friends with this girl, but always with a “thing” between us, I apologized. We both felt better and it was good for our relationship.

I have also apologized to my brother for embarrassing him in front of my friends when I was about eight and he was five. I know it sounds goofy and he didn’t even remember, but I did. And I didn’t want to have that between us if it had haunted him.

Who are the “bad people” in your story? Does it make any difference to your perspective when you consider that you are also bad in someone’s story? It is never too late to start new stories with people – or with yourself. If there’s something that you do that comes off negatively, there’s no time like the present to change it.

Be the best person you can be and hold the door open for people on the elevator. I would say try not to honk, but let’s be reasonable. I’m okay with being that bad person if it gets someone off their phone at a green light!