The definition of insanity is doing the same thing over and over and expecting different results. Maybe it’s time to do something new!

One of the most popular quotes that you’ll hear is “The definition of insanity is doing the same thing over and over again and expecting different results.”

We’re not going to discuss the exact origin of the quote (which is debated, although typically given to Albert Einstein, Benjamin Franklin, or Mark Twain, but is now believed to be originally recorded by Rita Mae Brown and in print in her book Sudden Death, Bantam Books, 1983 or an Alcoholics Anonymous pamphlet, 1981) or the exact formation of the words in the definition of insanity quotes (which are slightly different depending on who says it or where it may be written), but we are going to discuss the meaning and how it relates to empowering yourself.

There are things that we do in our lives over and over because they feel comfortable, they feel safe and they keep us from having to go outside of our comfort zones. Some of these things also result in keeping ourselves from making progress in this world and stripping us of our personal power.

For me, that is where the definition of insanity lies. Insanity is when you’d rather continue putting yourself in the same situation over and over again even when it is not helping you or anyone else.

The Clinical Definition of Insanity Is Different

Our common saying is very different from the clinical definition of insanity.

According to Law.com, the legal definition of insanity is, a “mental illness of such a severe nature that a person cannot distinguish fantasy from reality, cannot conduct her/his affairs due to psychosis, or is subject to uncontrollable impulsive behavior.”

There is a difference between having an insanity defense in court (or being found “not guilty by reason of insanity”) and going with this modern saying.

That said, doing the same thing and expecting different results is a good definition of insanity for the layperson. After seeing that nothing changes, why wouldn’t someone take a different approach? But it continues on and on.

We see examples of this all over, so let’s start with dating. Let’s say that you are looking for a super stable guy with a good job, a good means of transportation, a great sense of humor, loves books, and has a fantastic connection with his family. Every weekend you get dressed up after hanging out with the girls and go to the club at 1 AM, but you’re still not meeting that guy.

I’m not saying that you can’t meet Mr. Right at the club at 1 AM, but if it’s not working for you, try some better places. Think about where this guy might hang out or what he might do.

If you want a guy who loves books, join a book club for singles. If you are looking for someone who loves to dance, go to open dance classes where no one brings a partner.

This will absolutely take you out of your comfort zone, but you might just find what you’re looking for – even if it’s just some additional confidence. Try new things and invest in your own behaviors. Confidence is attractive.

In some cases, when dealing with a personal alcohol or drug war, it is about finding support for their mental state to help change the cycle. An anonymous organization such as narcotics anonymous or alcoholics anonymous is there to help people take a step out of the form of insanity they are living.

When something has a hold on you and you are dealing with addiction, the only way through may be to reach out to someone who truly understands and has been there.

Sometimes changing things up is really a matter of trying to change your own behavior. For example, one of the key things that I hear a lot from people as their children reach their teenage years and adulthood is that they have trouble connecting. Some of that is hormonal, but some of it is that they are truly becoming/have become different people.

Maybe they don’t want advice, they just want you to listen. They want you to keep your own opinions to yourself and just lend an ear.

Maybe they want some space, but for you to remind them that you’re always there. Maybe they want you to offer to spend the day with them and not talk about anything that has been an issue. Think hard about the relationships that you have and try to pick out the type of actions YOU are taking to contribute to the insanity.

What is it that you are doing over and over that keeps the two of you from finding a way to each other? This doesn’t mean that the other person is perfect by any means, but sometimes it’s about taking some baby steps in a different direction to stop feeling that you are banging your head against a wall.

If your head or the wall aren’t in the same places that they were, it might not hurt quite as much.

What Can You Do Differently?

Remember, you are the only one who can change what you are doing in any given situation. If you find yourself taking similar steps over and over and hear yourself complaining about the bad thing that just won’t stop – you’d better pay attention to what you are doing to contribute.

The next time you have a moment like this, stop and look at yourself. While the world has a lot of influence, you are the one in control of your life and your path. Maybe it’s time to do something different.

Human beings don’t see changes at the speed of light. You can’t blink and make things change. But you can work towards a different outcome than you’ve experienced before. Look for better jobs, healthier relationships, and figure out if you continue a lot of routines because they’re healthy or comfortable.

As far as I’m concerned, the definition of insanity is near the opposite of that of empowerment. Empowerment is about doing different things that truly benefit you – and hopefully those closest to you – in the long term.

Empowerment is about recognizing what may be physically or psychologically unhealthy and making those small steps to change yourself and your world for the better. Maybe it’s time to step out of the insanity and into something a little bit better. Become your own inspiring story. 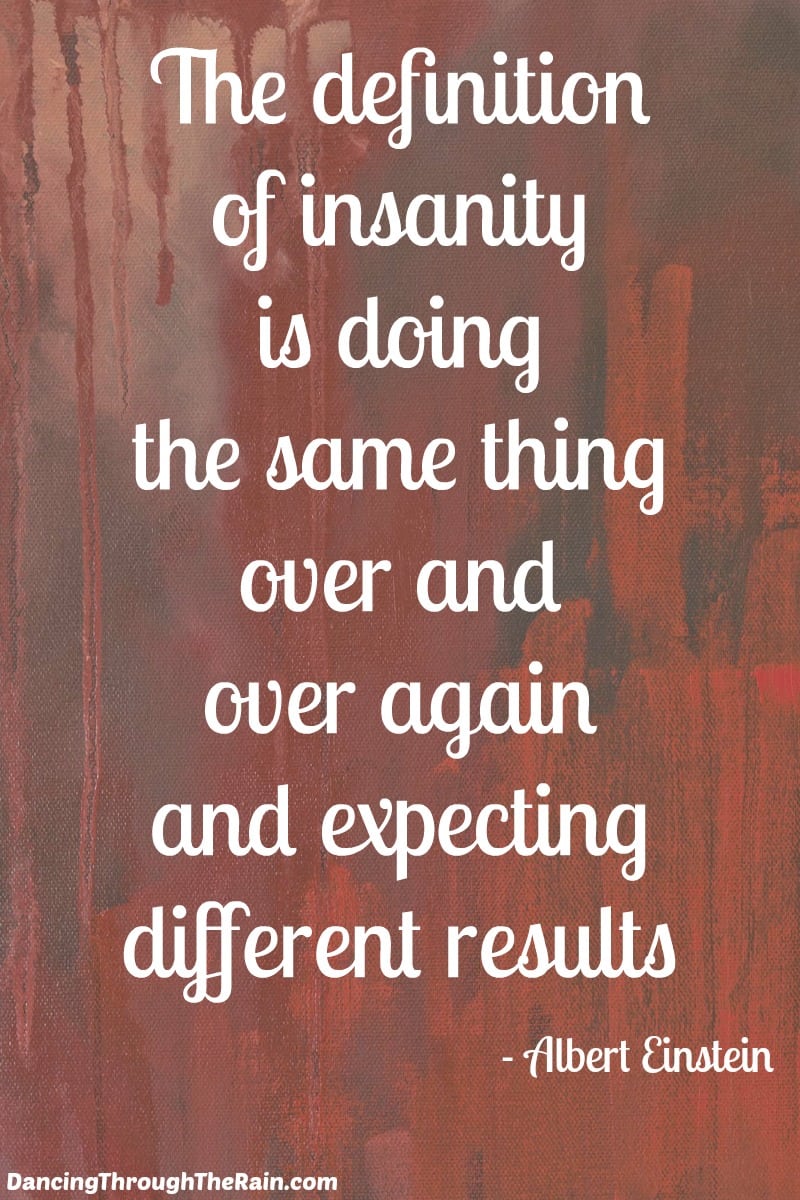